Standups Suck, and Here’s how to fix Them

At one company I used to work for, I had three standups every morning. It should have been five because at one point I worked with four squads (making five with the design team) but I simply never joined them all.

This is how my usual mornings went.

I’d get to the office at around 8:30am – a bit early so I had some time to sort out my desk and check email. My first standup was at 9:20am. This was the design standup which should have taken about 10 minutes but quite often extended to double its allocated time. I then had 20 minutes till the next standup at 10am. This was the one that always started late and usually extended well over the allocated time. Right after that one, at 10:15am was the next standup. This one usually took about 15 minutes to get through.

By the time I was done with all the standups, two hours had passed. Two hours out of the eight of my working day and I had got nothing done, and no time or energy to take a look at what I should start working on. Add lunch time and a couple of meetings to the schedule and you’re only left with two or three hours that you can actually spend working on something.

Don’t get me wrong. I’m not one of those who think that standups are fundamentally flawed. I think they’re great – when done right. But that’s the catch, very few companies get them right.

The basic idea of a standup is: share with your teammates what you’re working on and if there’s anything blocking you. So standups really do make sense when they’re timely, when the team is cross-functional, and everyone from the team works on the same project. I would even go as far and say they’re essential for moving things forward and keeping the momentum going. But that’s pretty much the only case when standups work well (at least in my experience).

Do you Need Them in the First Place?

Sometimes, the best standup is no standup. You don’t need a standup if you’re working on a small team, in a dedicated room where the communication is continuous. People argue that this only works in small startups and teams in general. At GitLab (currently 250+ people), we don’t do standups. We encourage people to work asynchronously and it seems to work just fine.

How can you do Them Asynchronously?

Could you ask the team members to write down what they’re working on in your Slack channel and only have a proper standup if someone is blocked or a quick discussion is needed? You could save a lot of energy for a lot of people who could already be working in the meantime.

Can you Minimise Them so Each Person Only has one Standup a day?

What killed me most in the experience I described above was that I had to attend so many standups. The fact that I spent two hours at work producing nothing quickly became frustrating for me. If you have people spread across many squads you should probably rethink your organisational structure anyway.

If you really need to have standups make them short. Each person should only have one minute to share what they’re working on. Any follow-up discussions should happen afterwards, only between the people that are related to the topic.

Cut the Number of Participants

If you have standups with groups of more than seven people, you’re doing it wrong. Let’s say you’re doing a standup with nine other people. Let’s also say you don’t follow the advice above and let people speak freely for more than a minute. If each of the people involved speaks for two minutes on average, you end up having 20-minute standups. That’s way too much. Seven participants, each speaking for one minute will only take seven minutes in total (65% less) and you can all go back to work.

If there’s a standup there’s a standup. Don’t keep people guessing whether the standup is happening or not. In my experience standups would be cancelled many times without the participants knowing. Instead of waiting for it to happen they could have already started working (it’s hard to commit to larger tasks when you know that you have a meeting in 10 minutes).

Standups aren’t fundamentally flawed. The basic idea is good – it’s a quick and easy way for the team to stay in sync, identify blocks early and schedule further discussions if needed. The problem with them is that they’re not being executed properly most of the time. Not every company and not every team needs a standup as well. This is not a hipster, one-size-fits-all solution for managers that will solve most of their problems. It’s not a silver bullet, it’s a tool that, like most, is best used within certain constraints. It’s about time we start using it as such. 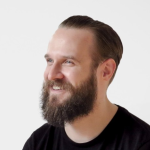 Matej is a Senior UX Designer at GitLab and the author of the Better Web Type project. Originally from Slovenia but his passion for simple and usable design took him on a journey through Germany, Luxembourg, London and now Edinburgh in Scotland. He thrives in the grey area between design and development.