Why Your Products’ Controls Should Have No Labels

Have you ever found instructions on the shower faucet in a hotel room?  I’ll bet you have. Here is the shower in a Sunnyvale hotel at which I recently stayed. The faucet was so complicated to use that they had set aside a tile with instructions on how to use it. I probably could have figured out this shower without the instructions, but in our guest room at home we have a shower control that really needs instructions. Before reading on, take a look at this photo and decide how you divert the water to the showerhead from the tub. Did you figure it out? If so, you’ve either encountered this set-up before or you’re very smart. To divert the water to the showerhead, you pull directly down on the rim of the tub spigot.  Obvious, no? Every guest that has stayed in our house has asked how to operate the shower. We probably need a sign.

These are great examples of products that are not designed well.  Shower controls, like all products, should provide an ‘affordance‘ (way of manipulating it) that naturally indicates the function.* For instance, a lever that points up toward the shower or down toward the tub might make more sense to indicate whether the shower or tub gets the water. The way the lever faces provides an obvious clue as to what it does, in this case by pointing to the fixture it will affect.

As a product developer, it’s important to create a model of the variables you want your users to control. For a shower control, there are three separate variables: water temperature, water flow and whether the water is going to the shower or the tub. In the design, controls for each of the three variables should be designed thoughtfully to indicate their use without labels. Labels that explain how to work a product usually indicate that the designer skipped this step.

Whether you are designing a washing machine, an MP3 player or a website, there are some basic rules you can follow to eliminate labels on your controls.

Most importantly, test your concepts for controls before putting them in a product. You don’t need a big usability testing lab to do this.  Bring in five to seven potential users, give them an assignment (like ‘take a shower’), and see how they use the prototype. You may be surprised when your controls aren’t as obvious as you thought. Change your design and test it again until new users have no confusion.

Well designed product controls don’t need labels. But you can’t simply remove the labels from your controls without also making sure they are obvious first. Doing the design work to make them obvious is well worth the effort. And one added benefit is that your product can then be used in any country regardless of language.  It’s a lot cheaper to design the product once than carry an inventory of 10 different localized versions of the controls. Your design will look cleaner, and I would wager you’ll sell more too.

*If you’re interested in learning more about the design of shower controls, door handles, and refrigerator knobs, Don Norman’s seminal book The Design of Everyday Things is an outstanding read.  Don is widely regarded as the first person to apply the word ‘affordance’ to the design of everyday objects, and his book should be required reading for all product designers. 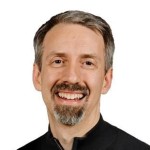 Peter Hildebrandt has led R&D and product marketing teams for over 12 years and consulted with many Fortune 500 companies on design, usability, and user interface design. He is the founder of Hildebrandt Associates, which helps bring the user into the design process. 3 thoughts on “Why Your Products’ Controls Should Have No Labels”