Last month I was one of more than 200 product people who got together for this year’s ProductCamp London.  To make the most out of my first time, I proposed and ran three sessions. They all provided a safe space to share insights among peers, but I’ll focus on just one of them – a group discussion on remote/distributed teams.

Why remote/distributed teams? I am a product manager at Onfido, and we have most of our technology function spread across the London HQ, Lisbon (where I’m based), and offices across the world. I deal regularly with stakeholders from San Francisco to Delhi, and my teams have included people working from home in the UK and Romania – so distributed teams are dear to me. Here are some of the ProductCamp group’s key conclusions and takeaways on working in remote and distributed teams from what was a lively and valuable discussion.

The first challenge we discussed was time zones. We had some extreme examples among the group, like a team spread between the UK and New Zealand.

Coordination can be optimised by having key communications happen asynchronously and in plain sight – for example in public/team Slack channels as opposed to direct messages – while keeping everyone working within their home time zone.

The “in plain sight” aspect is true regardless of time zone differences. It’s important to keep key conversations in the open, rather than in silos by the watercooler.

Although the idea of deciding in one time zone and clearly communicating to inform “remote teams” was discussed, the group mostly agreed that it is better to involve all distributed team members in decision making to begin with. This is a big sign that communication in this context needs to serve a bigger (and more complex) purpose than just tactical coordination.

We agreed that the principle of being Remote First is paramount: if even just one team member is not co-located, then everyone  should adopt the same behaviours as a fully distributed team. Meetings with lots of people around a table in a meeting room with one or two odd ones peering from afar create a natural tendency for the former to dominate the conversation – so each team member, whether remote or co-located,  should be encouraged to join the call individually, and always have their webcam on. This not only breaks barriers and cliques, but also allows everyone to see each others’ facial expressions.

If no other meetings, then at least team retrospectives should be held synchronously, and on video call. But how do they pull this off in our UK–New Zealand example above? The answer is not without affecting someone’s personal life. In this case, there were only two people in the UK (versus a dozen in New Zealand), so they would be the ones joining in the middle of the night. To ease the impact on the personal life of those in the UK, the team batches their UK–New Zealand synchronous communication (retrospectives, one-on-ones) in one single night.

In a cross-functional product team, there needs to be room for everyone to challenge and be challenged, and the key ingredient for this, we agreed, is mutual trust. But does this work the same for everyone?

Inclusion Across Personal and Cultural Differences

Personal differences in turn come in many flavours, such as preferences or personality traits. Some people are more outspoken than others, so if we’re to reap the benefits of having a diverse team we need to ensure that the voice of the outspoken doesn’t muffle quieter voices. Everyone needs to be given the opportunity to feed in during a collaboration session.

As for cultural differences, nothing beats fostering ways for the team members to get to know each other better as individuals. However, being mindful of country-based insights from studies on cultural differences does help. Two useful references that came up were Geert Hofstede’s cultural dimensions theory, and the 2014 book by Erin Meyer, The Culture Map: Breaking Through the Invisible Boundaries of Global Business. Every human is unique, and knowing how the society in which they were raised tends to approach and perceive things like hierarchy, giving and receiving feedback, or establishing work relationships may help understand why someone might think or act differently from us. When providing “culture training” on staff, companies with a distributed workforce should not treat this culture gap as taboo. It may even provide ideas on how to capitalise on these cultural differences.

Work in a distributed team needs to be organised in a way that doesn’t require someone to travel to the head office whenever a collaboration activity needs to happen—but you should get the whole team together periodically. The echo in the room was that these trips pay off — the returns you get from  a thriving team of people who know and trust each other outweigh the cost of planes and hotels once or twice a year.

You can still run social activities without the financial (and environmental) cost of flying people round the world. One fun idea we heard in the room was that of a remote social  where everyone is having the same meal together, catered to the cuisine of one the countries represented in the team. Running a lunch/coffee roulette on Slack with Donut is also fun! 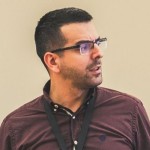 I’m a Lisbon-based Senior Product Manager with 10+ years experience in software (researching, building and teaching), the last 4+ of which in product discovery and delivery (mostly in B2B products). Before joining Onfido, I did research (and a PhD) on real-time systems at LaSIGE, moved from software engineering to product management at Premium Minds (a Portuguese software development agency), and taught computer science courses at U. Lisbon and U. Lusófona. My current challenge at Onfido entails building tools and engines to efficiently combine AI-driven identity verification with expert human insight at high scale. Outside work, I’m a proud father of one, amateur piano and guitar player, and public transportation systems/maps enthusiast.