Don't have an account? Join the community. Its free!
Login instead?

Get the best product content from across the web

Sign up for our free weekly newsletter with a lovingly curated selection of the best product content from all over the web.

help  What we do with your email address
Skip to content
What is Self-Awareness and why Should you Care? "Product people - Product managers, product designers, UX designers, UX researchers, Business analysts, developers, makers & entrepreneurs May 05 2018 True core values, Johari window, Product EQ, self-awareness, Mind the Product Mind the Product Ltd

What is Self-Awareness and why Should you Care?

The biggest opportunity for improvement – in business, at home, and in life – is awareness. Alan Mulally, former CEO of Ford Motor Company

In 2006, Alan Mulally took over as president and CEO of a struggling Ford Motor Company. Ford’s glory days as one of America’s top automotive companies were a distant past, and the company was staring at $17 billion losses. While other notable industry leaders from Daimler AG and Renault/Nissan had turned down the offer to take the top role, Mulally jumped on board.

In just over five years, Ford was reporting $20 billion in profits and was the only automotive company in the US to avoid a government bail-out.

What was the secret sauce to Mulally’s success? You could point to his success at negotiating new contracts with labour unions to cut costs, increases in organisational efficiencies, or his introduction of a strong vision to enhance stakeholder value.

But, when asked about the greatest moment of the turnaround, Mulally says it was when his executive team started being comfortable enough with him to tell him the truth. Once this team of senior executives realised that they could count on him and each other to get through their seemingly insurmountable challenges, the turnaround really started.

In her book, Insight: The Power of Self Awareness in a Self-Deluded World, organisational psychologist Tasha Eurich investigates Mulally’s drive to create a culture based on his own work towards self-awareness; something he attributes to an earlier experience when a favourite member of his team at Boeing quit suddenly. That moment struck him like thunderbolt, igniting a passion to learn more about himself and his impact on others.

What is Self-Awareness Anyway?

Good leaders, like Mulally, may make the work look easy, but they’ve done a lot of work on themselves to get there. To get an understanding of what type of work we’re talking about, let’s start with a basic definition of self-awareness.

“The ability to see ourselves clearly – to understand who we are, how others see us, and how we fit into the world around us.”

What I like about Eurich’s definition is that it pushes the boundaries on the more traditional thinking of self-awareness, which often focuses on an inward study of self – how we think, feel and act – with less focus on how our actions impact others.

Eurich’s approach is more multi-dimensional and incorporates inputs from the outside world – be it from your partner, team or the organisation you work within –  into a more rounded view of self. The world outside of us becomes stimuli for self-awareness.

The Business Case for Self-Awareness

The theologian and philosopher St Augustine said that: “People travel to wonder at the height of mountains, at the huge waves of the sea, at the long courses of rivers, at the vast compass of the ocean, at the circular motion of the stars; and they pass by themselves without wondering.”

While for some, the concept of self-awareness may be way too “touchy feely” to consider (or perhaps even read about), for those who do take the time to focus on growing self awareness, the benefits can be life changing – for you and for those around you.

I can speak from experience. As someone who has been a student of my own self-awareness over many years, I can say that the experience may feel like you’re on a never-ending road to nowhere at times. However, the outcome so far has been beyond worthwhile both personally and professionally. While I still have a lot to learn about myself and how my actions affect others, I’m happier, healthier, and basically just feel better in my own skin. It’s an ongoing process of action, reflection, and integration that I value and now try to work with others to engage with. (Yes, remarkably similar to the build-measure-learn approach we all work with daily!)

The data says that I’m not alone in that feeling. Research shows that with a stronger sense of self-awareness, we are more aware of our strengths and weaknesses, helping us to make better decisions, be more creative, build better relationships, be more empathetic, communicate better, and often get more promotions at work. It’s no wonder that Eurich calls self-awareness the “meta skill of our time”.

For those more interested in the bottom line, check out “A Better Return on Self-Awareness” by Korn Ferry Institute analysts David Zes and Dana Landis. This whitepaper shares data from 486 publicly-traded companies over a 30-month period from July 2010 to January 2013 that shows a link between self-awareness and business performance. According to Zes and Landis:

With that type of impact on a company’s bottom line, it’s not surprising that the more immediate impact can be felt on your team.  According to Eurich, employees who lack self-awareness:

According to Eunich’s research, 95% of people think they’re self-aware, but the real number is closer to 10% to 15%. In another study of 17,000 people worldwide by the Hay Group Research, 19% of women executives and 4% men interviewed displayed self-awareness. No matter how you slice it, we all could use some focus on building that self-awareness muscle.

Thankfully, as with all of the competencies of EQ, you can do just that. But, just as I discussed in the post on conflict resolution it’s going to take time and commitment.

Here’s three ways that you can start:-

Unless we understand our own values we aren’t going to be able to make decisions in our best interests.

As part of my coaching practice, I often work with clients on values to build self-awareness around who that person is, what’s important to them, what’s immovable, and how they are living that value every day.

Recently I worked with a product manager who was in a very dry, technical position in an aggressive organisational culture that he was very unhappy in. He had tried just about everything to make the job and the company right for him – tried to improve his stakeholder management skills, experimented with team rituals and ceremonies and much more – but nothing was working.

In one session we did a values exercise to better identify his key values (five or six values that resonate with fundamental, core beliefs). He selected creativity as a key value, but was working in a very dry, technical position in an aggressive organisation that restricted creativity.

He realised that the tension that existed between his need for creativity and his company’s culture was making him stressed, frustrated, and just plain fed up. As a result, he became more confident and clear about what he needed from a working culture and has since moved on to a new product role that embraces creativity.

According to Robert Bruce Shaw, author of  Leadership Blindspots: How Successful Leaders Identify and Overcome the Weaknesses That Matter, a blind spot is an unrecognised weakness or threat that can undermine your success. Uncovering and addressing them is a huge opportunity for self-awareness.

One of the best ways to beat your blind spots is to ask for honest feedback. I know, it’s something we talk about all the time – the importance of feedback, how to give and receive it, the fact that (unlike Christmas presents) it shouldn’t be given just once a year at performance reviews. I’m going to go on about feedback again, but encourage you to think of it with a slightly different model.

Marshall Goldsmith is an executive coach and author who says that we tend to accept feedback that is aligned with our view of self, and reject feedback that doesn’t match our view of reality. In his book, What Got You Here Won’t Get You There he says constructive feedback is based on four components:

A tool that I use to facilitate constructive feedback in coaching is the Johari window. A concept created in 1955 by American psychologists Joseph Luft and Harrington Ingham (aka Johari), this simple tool helps others see who you think you are and how you see yourself.

Try the Johari Window with your team:

It’s interesting to repeat this exercise at different phases of your team’s development – be it forming, storming, norming, performing.

3. Have Regular Check-ins With Yourself

We all have crazy, busy days and can easily lose track of ourselves in the ongoing cycle of commute, work, home, repeat.

In my own efforts to break this cycle, and grow my own self-awareness, I’ve found that simply taking a few minutes a day to check in with myself can be a huge benefit. Be it mid commute on the tube or bus, in a conference room before a meeting, walking down the street, drinking a cup of coffee, or even washing dishes – I find an opportunity to clear my mind, just focus on my breath and check in on how I’m feeling, what I’m worried about, or maybe how I’d like to handle an upcoming meeting.

In some ways, it’s often a mini-moving meditation that helps me retain my focus and get a bit more grounded.

Find what works for you. For some, it might be running, going to a yoga class, or simply walking around the block. For others that might be journaling, going to art museums, or meditation. Find what’s right for you.

Because at the end of the day it all comes from you. You do the hard work. But that intention can take you – your family, team, and even organisation – to a far better place. 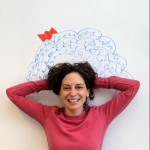 Kate has more than 20 years product management, leadership and marketing experience with the likes of Yahoo! (Sunnyvale and London) and MOO.COM (London). Since 2011 she’s been a strategic product consultant, leading organisational design and transformation initiatives across finance, government, travel, e-commerce, and non-for-profit sectors. Her blog, Product EQ is dedicated to the practice of cultivating emotional intelligence in product management.product/organisational transformations.

How to get Things Done: Raise Your Organizational Awareness