Is Contract Product Management as Scary as it Sounds?

This is counter to the trend towards portfolio careers across many industries and disciplines, with more and more people feeling the benefit of diverse challenges and more businesses valuing varied expertise.

The Wellcome Trust – a charitable foundation with 500 staff and a website team of 35 – has had a product management structure for two years and employs five full-time product managers. Last year it decided to hire a product manager on a fixed-term contract to lead the development of a new product.

Calum Wiggins was Wellcome’s longest serving permanent product manager and the arrival of a contractor came with some concerns. Would a contractor take all the fun work for their team? Would they care about the long-term health of the platform? Would they disrupt relationships in order to get things done fast?

On the other side, Jobina Hardy had considered a move to contracting for a long time but she had concerns of a different kind. Would she feel like an outsider? Would it be possible to get genuinely stuck into the big problems without being embedded long-term? Would it still be fun?

Jobina accepted a six-month contract to set up Wellcome’s new team, define the new product and kick-start the development work. And so, with their fears bubbling away beneath the surface, Calum and Jobina began their working relationship. Did their fears match up to the reality?

“I Wasn’t Sure I’d Feel like a Real Member of the Team.”

Jobina: As a plug-and-play outsider, I was afraid of feeling like a second-class citizen and missing out on one of the main joys of product management – being part of a team. Product management is such a communications-, context-, and relationship-based role, so it can feel as though it has to be a fully-embedded role in an organisation.

In reality, being on a fixed-term contract has had no bearing on the sense of teamwork or belonging. Being a product manager puts you in a great position to embed yourself in the immediate team. Whether permanent or transient, a product manager always has to build the sense of teamwork around their product: a mission, a vision and a shared ambition.

This same is true for embedding quickly across the wider team. As a product manager you have licence to introduce yourself, ask interesting questions, and create new relationships. Using sprint ceremonies, team socials, and stakeholder demonstrations all help this sense of quickly becoming a part of the organisation.

“They Won’t Understand the Organisation.”

Calum: It can take time to develop a good working understanding of an organisation and its quirks. I’d learnt through experience how to run an effective product team in an environment where that isn’t always easy. There was a risk that a contract product manager could rock the boat, damage hard-fought relationships, and make everyone’s work harder.

In reality, as a contractor, Jobina’s slight sense of removal from the core team has brought the right amount of disruption. But she has also been thoughtful and done her homework on the organisation and stakeholders. And as the product she’s leading is entering a new area, she’s starting to raise the profile of the digital team in parts of the organisation where there was limited awareness previously.

“Will Being Parachuted in put my Team on the Defensive?”

Jobina: As a contractor, you really have no idea of the environment that you’re coming in to. All you know is that you need to create results quickly, since your time is limited and you don’t want to leave things in the same – or worse – state as you found them.

Wellcome’s decision to hire someone new – for a limited time and quickly – could have bruised egos, causing further unnecessary conflict. With this kind of appointment, interview processes are typically faster and much more perfunctory. Companies aim to fill most contract roles within two or three weeks, so to the existing team it can seem that you’ve appeared out of nowhere, with people not necessarily expecting your arrival!

At Wellcome, we minimised this risk on both sides by using clear communication and boundaries to avoid a sense of confusion or panic. Before the contract started, the hiring team had defined the project scope clearly. Even though – as with many product definition roles – there was a huge amount of uncertainty, the hiring team had taken the time to try to agree some goals and expectations. They had also primed the leadership on the clear focus of the new product.

Having clarity of purpose helped to avoid a lot of unnecessary angst. As a result, I was welcomed with open arms because the organisation was already on board with the need for someone to hit the ground running. When I arrived, I could introduce myself with a clear remit and a positive sense of coming in to support the organisation’s goals, by creating this new and exciting product experience.

“Will I Have Less Autonomy and More Stress?”

Calum: I was worried a contractor would take a short-term mindset, prioritising new features, with any work to maintain the platform being de-prioritised or pushed over to the other product team.

Instead, it made it possible to dedicate a healthy proportion of time to maintenance while not compromising the new and interesting work. Being a contractor doesn’t remove the responsibility for long-term product stability and growth.

Regardless of who is managing them, having two teams rather than one creates more flexibility. At any given time, one team will likely be in a better position than the other to jump on an urgent bug fix or make technical improvements. But this regularly shifts, and over the course of a few months, it evens out.

Our Conclusion? Face your Fears

The potential issues in working with or working as a contract product manager are just the same as any product management role. By approaching any negotiations with mixture of pragmatism and generosity, we ensured that both teams had a fair balance of work, a sensible eye on future stability and the sense of excitement and momentum that comes with doing something new.

If anything, product managers have a skill set better suited than many to a contract role – you are able to get stuck in, survey the current landscape without organisational bias, and find a way to make positive things happen. And working alongside the contractor, permanent product managers can help with a deeper understanding of how the organisation works and how to get things done.

It’s given us the best of both worlds: a combination of contract and permanent product perspectives leading meaningful digital change. Jobina is a freelance Product Management Coach and Consultant in Central London (www.productwrangler.co.uk). She held numerous job titles in her life in technology startups before stumbling across the one phrase that really made sense for all of it - Product Management. In case you're curious, she also grows vegetables, enjoys fancy dress and sings a lot. 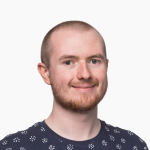 Calum has recently started working as a product manager for Moonpig in Manchester. Previously he led product teams at Wellcome, one of the world's largest charitable foundations. Outside of work Calum enjoys photography and collecting houseplants.