Why is it that some products take off while others fall flat? There are many tactical reasons we can point to such as timing, competition, or product-market fit. Fundamentally though, there is one consistent truth regardless of the reason we may determine: some products create value for the market they’re serving, and some simply do not.

Ask yourself whether your product addresses an unmet need or desire. There are two ways to address this problem – outside-in, or inside-out. Lean process has earned a lot of well-deserved accolades in recent years for its outside-in approach and emphasis on working with customers and stakeholders to understand their logical needs and how best to solve them. It may not be the best tool for breakthrough visionary products however, as Steve Jobs once suggested at when he said “It’s really hard to design products by focus groups. A lot of times, people don’t know what they want until you show it to them.” Howard Schultz from Starbucks also eluded to this when he said “If I went to customers and asked them if I should sell a $4 cup of coffee, what would they have told me?”.

When seeking to develop breakthrough visionary products, the opposite approach (inside-out) can provide insights that may not be achieved with in outside-in approach. By looking at where existing demand (and competition) is and strategically forecasting where opportunity should be if you were to extend the value complex of an existing commodity product. This approach is reminiscent of the Value Innovation approach described in Blue Ocean Strategies.

To provide clarity on this latter (inside-out) approach, I created a conceptual model I call the Value Creation Plane. It can be useful for understanding the types of value creation and can be used for analyzing where value is currently being created in a given market and projecting how to extend that value in a meaningful way.

The Value Creation Plane starts with 2 spectrums that are juxtaposed on a Cartesian Plane. The X axis represents the Business Function spectrum, with Monetization (yield and asset management) at one pole and Innovation (technology, UX, etc) at the other pole. The Y-axis meanwhile represents the Perceived Value spectrum. At one end of the Perceived Value plane is Entertainment (Emotional Value) and Productivity (Logical Need) is at the other pole. When we lay these two spectrums perpendicularly across a flat plane, we end up with four quadrants that represent the four positions a brand could take in creating value.

How is this useful? Consider the scenario where you want to enter an established market but you want to innovate the market by taking it to the next level as Apple or Starbucks did. You’d start by identifying the quadrant where the majority of the competition resides, and then determine how you can transcend to another quadrant, thus providing new value. The Value Creation Plan is a simple planning tool that will make this process easier.

In the case of Apple, they created new value around a boring commodity market for computers that focused entirely on quantifiable metrics of value such as Megabytes and CPU speed. Apple created new value atop this commodity market by taking what had been squarely in the bottom-right quadrant and shifting to the upper-right quadrant by appealing to emotion through design and user experience; something sorely lacking from the computer market until then.

Starbucks meanwhile took the coffee commodity market (bottom-left quadrant) and shifted to the right. They created a premium version of the commodity product and then built an entire value complex around it. If you are looking for a remote office to get some work done, you now have a table, WiFi, and an electric outlet. Or, if you’re looking for a place to socialize on a Friday evening, you can buy a Carmel Macchiato in lieu of going to a bakery for a pastry. And because of all of this additional value, the use case fundamentally shifts from simply needing a cheap/quick coffee infusion, to rather satisfying other use cases of productivity and socializing, and as such, they’re able to capitalize on coffee without being anchored to the commodity at its core (coffee).

At the end of the day, the only products that matter are those that introduce additional value to their respective market. The best way to ensure you’re generating such value is to focus on addressing an unmet need or desire. If you’re philosophically aligned with this fundamental truth, then you’re already half-way there. As for the rest of it, consider the type of opportunity you want to go after and whether the outside-in or inside-out approach is the best for defining your initial product vision. There may even be opportunities to combine these approaches, though pursuing a breakthrough visionary product will probably require strategizing a bit deeper and developing your prototypes to a more production ready state before engaging customers. 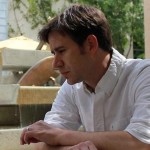 Product leader based in Los Angeles, California. Founder of Productfolio.com, PMA.LA, and. Author of the book, The Smarter Startup (Pearson).